Despite their tiny size, bed bugs have become an enormous problem and health risk in both rental units and hotel/motel rooms in recent years.

Now, bed bug bites are a real nuisance but nobody’s died from these bites according to my research. The range of symptoms from a bite is from a red slightly swollen welt that itches to intense burning. This can be multiplied by the dozens with many bites and the discomfort increases as well. It largely depends on the sensitivity of the individual.

There are exceptions in the extreme – in 2007 a wealthy couple sued a posh London hotel after suffering hundreds and hundreds of bites. While they physically recovered, they alleged severe psychological trauma claiming they would wake up in the middle of the night feeling like they were crawling with bugs. They also developed a fear of travel and hotel stays. The internet is silent on the outcome of the suit which tells me there was probably a nice settlement with a confidentiality clause to keep them from yapping about their windfall. 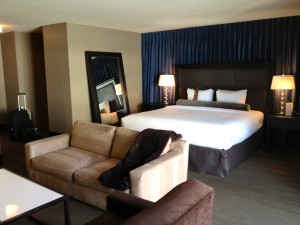 So over the years hotels have been put on notice that failure to inspect and treat for pests such as bed bugs can result in a claim for negligence and expose them to liability and lawsuits. There aren’t a lot of commercial insurance policies that cover hotel/motels for bed bug liability.  Most likely any settlement will be coming from the hotel owner themselves. You’d think this would be enough incentive to protect customers from bed bug bites, but some innkeepers are just willing to roll the dice that the unwary consumer will not pursue a claim further. Don’t make this mistake.

How do you know if those bumps on your body in the morning are from bed bugs? Other than the rancid sweet smell, there are other ways to do your own detective work:

If your skin is crawling at this point, I get it. These little guys which look like a lady bug’s uglier cousin become absolutely grotesque when magnified. And nobody likes the thought of being a bug’s blood host.

I’ve made it a habit to check the bedding area of my hotel room to determine if there is any evidence of bed bugs before I get tired and ready to turn in. Be proactive. And, as discussed, this doesn’t only happen in The Flop House Inn. It can happen anywhere. Better hotels inspect, hire a pest control company and inspect again. Bed bugs are preventable.

However, if you wake up from a long night’s sleep looking like a gigantic welt, and there is abounding evidence of bed bugs around and you want to preserve your rights to make a claim against the hotel or even file a lawsuit, here are some steps to consider:

The best way to prevent bed bug injuries is to be your own best advocate: Inspect your room, report bug activity to create actual notice to the front desk, and always ask for another room. If they cannot, get your money back and head to a competing hotel, if possible. You’ll thank yourself for it later.