Clearwater pest control operators are getting more and more calls from frantic homeowners who have discovered bedbugs in their homes!

Have you ever thought that a bed bug infestation can’t happen to you? Well, in January 2013 Orkin put out a 2012 Top 50 list of most infested cities across the United States which shows an increase in infestations across the county. Bed Bug infestations in Tampa and St Petersburg put these cities at #44, even though in 2011 they didn’t even make it on the list. Miami and Ft. Lauderdale rank #25 on the list. 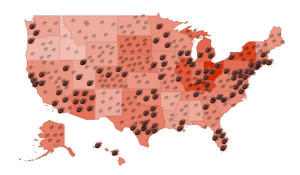 In late 2011 Pest Control Technology (PCTonline.com) wrote an article including research from the National Pest Management Association and the University of Kentucky showing a dramatic increase of bed bug infestations in places outside of the home. These include:

Don’t bring these little bloodsuckers into your home. Protect yourself and your family today!

Clearwater Pest Control – How to control cockroaches in your home!