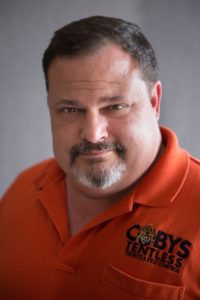 Coby’s Termite and Pest Control is owned and operated by Coby McConnell.

Coby was born in Akron, Ohio on April 19, 1967.  His parents were in the Marine Corps.  Being a military family, they were required to move every few years. Coby actually attended 8 different schools while growing up!

Coby loves drama and is involved with the drama department at his church. He has also enjoyed being an offensive line coach for little league football  for the past seven years.

Coby began his career in the pest control industry in 1986.  He worked with the big companies until 1998. He eventually went into partners with a local pest and lawn company until 2002, when he started Coby’s Termite & Pest Control.

Coby was first drawn into the pest control business because of his love of people and service. The pest control industry was the perfect opportunity for him to pursue that love.

From the very beginning, Coby dedicated himself to creating a level of expertise and customer service that he felt was missing in the pest control industry. He wanted to be able to provide not only the technical expertise, but a level of communication with his customers and clients that would lead to a lifetime of TRUST and RESPECT on both sides.

Because of his devotion to his job and his confidence in the overwhelming value he brings to his customers, he offers and GUARANTEE that is UNMATCHED by any of his competitors. To put is simple…he guarantees not that you will be satisfied…but that you will be 100% HAPPY…or you don’t pay!

If you’ve got a termite or pest problem…or even a question…call Coby’s Termite and Pest Control at 727-462-0400 and ask for Coby. He’ll be happy to speak with you.

And don’t forget to ask about our FREE 58 Point Pest Inspection and Analysis of your home or office!