Do you know the difference between frogs and toads? Coby McConnell, owner and president of Coby’s Tentless Termite and Pest Control, knows there is one significant difference about which you should be aware for the health and well-being of yourself, your family and your pets. 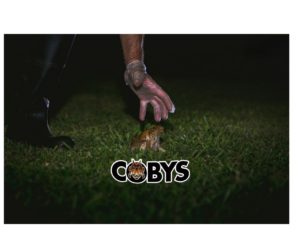 Frogs and toads are both tailless amphibians, but there are physical traits that sharply contrast one from the other. Frogs have smooth, moist skin, and are semi-aquatic. Their back legs are longer for jumping, and they are basically harmless.

One species, Bufo toads in Hillsborough County, became native to Florida when they were released in the state’s southern regions in 1955, to control white grubs in sugar cane crops. Bufo Marinus, are a different, potentially deadly breed.

Their skin is dry, rough and warty, they have bony, straight protrusions that align parallel on each side of the head, and their back legs are shorter than those of frogs. One significant trait of the dreaded Bufo toad, otherwise known as a Giant toad, or Cane toad, is the noticeable glands which are found as lumps behind their ears, above the shoulders. These glands release a poisonous secretion when the toads are threatened or handled.

These nasty amphibians are highly-skilled at finding their own food, and have even been known to eat pet food. Be aware, Bufo toads in Hillsborough County can be found practically anywhere, but particularly in your yard’s landscaping. If you come in contact with a Bufo toad, the secretion released can cause burning eyes and skin irritation. If your pet finds a Bufo and ingests the secreted toxin, it can be fatal.

According to Florida Wildlife Extension and the University of Florida, signs your pet may have Bufo toad poisoning include “drooling, head-shaking, crying, loss of coordination, and, in more serious cases, convulsions. The dog’s or cat’s gums often turn red, an indicator used by veterinarians to distinguish toad poisoning from epilepsy. For this reason, pet owners should be familiar with their pet’s normal gum color.”*

In cases of toad poisoning, you will want to thoroughly rinse your pet’s mouth, being careful that the rinse water isn’t swallowed. Examine your pet’s gums and mouth, and gently rub to remove the toxin. In any case, you should immediately contact your veterinarian.

To humanely kill Bufo toads in Hillsborough County, first, be certain that is what you have. Cane toads have been mistaken for native frogs, so be mindful of the differences as stated above. Use gloves when handling to minimize exposure to the toad’s toxins, and put in a plastic zipper bag. Place it in the refrigerator until it goes to sleep, then pop it in the freezer. You will want to leave it in the freezer for several days to make sure it is dead. There are cases cited where these toads have “reawakened” after being in the freezer for too short a time.

If you’ve got a problem with Bufo toads, termites, or any other pest…or you simply have a question…call Coby’s Tentless Termite and Pest Control today at 727.462.0400 and ask for Coby.  He’ll be happy to speak with you anytime!

PSS:  Don’t forget to ask about Coby’s FREE 58-Point Pest Analysis of your home or office!