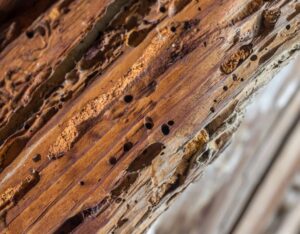 Hi, this is Coby with Coby’s Tentless Termite and Pest Control. Here to talk to you about different questions that I’ve been asked for over the last 34 years. These questions have ranged from anything from the price of something to how does something get into my house to what is this thing? So here it is to talk to you about that, I usually do it for about five minutes don’t want to take up too much of your time. So here we go. Last one we have we’ll talk about termites, we’ll talk about subterranean termites. So let’s switch over to drywood, termites, and drywood termites. The reason they are called that is because all they need is a dry piece of wood to live. In other words, once they get into a spot, they’ll start feeding on that piece of wood, and they don’t need any more moisture or any more food source or anything at all, they can feed on just that little piece of wood. Usually it’s about 12%, moisture, and it and it’s able to keep them going now. So when you have this termite colony, how they get there is they will swarm and normally a swarm, let’s say, here in the Tampa Bay area, we’ll see them swarm , say May 15, to July 15, could be a little sooner, it could be a little later. But that’s that’s in a nutshell, that’s what you’re looking at. So once we they swarm on the day they swarm, did the wind would towards your house, or do the wind blow away from your house. Okay, it’s that simple. They’re not great fliers, although they do decently, but and they are attracted to light. But that’s what they’re gonna do is if the wind blows toward blue towards your house, then you got dry wood termites, say for that two month period of time. So you got 60 days of there’s warming. And out of that 60 days that there’s swarming, only half the time the wind blows towards your house, you still have them half the time. So once you have them, they will go unnoticed for quite some time. Normally, what you’ll will see, when you see them is a small amount of granular looks at coffee grounds. Some people say saw dust, if you were examine it under a microscope, it’s a six sided pellet. What this is, is the droppings of the termites have left behind, where they’ve taken a bite of the wood, and they’ve extracted all the moisture they possibly can out of there. Once they’ve done that, then it’s no longer any good for them. So they go ahead and throw it away. And that’s what you’re seeing is them kicking out the pellets. Normally, when you see palettes coming out, it’s due to the fact that they need more room. So anytime you want any more room, your place if you take things and you move it out, well the move something else in while they’re trying to move more termites in. Now the good news about these termites is is they’re very, very slow. So in a five year period of time that termite swarms to your house, it now infest that area, the two termites that came together, king and a queen to form the colony. over a five year period of time there’ll be 500 termites before that colony can swarm again or go deeper into the home. 500 bucks sound like a lot of bucks. But when the ground termites you’re talking about a quarter of a million, big difference in the amount of damage now. Because the times you normally see these things, is in a neighborhood that is probably over 30 years old. Trees get older, the houses get older, the shrubs get older. And when that happens, those swarms become more and more and more often. In fact, if you talk to the old timers, in any of the places like downtown St. Pete, which is if I’m not mistaken, the number one place in the country for dry wood termites, they say the XYZ clouds, I mean just massive clouds of termites if you can imagine. So once they’re in, they’ll start spreading year by year, but they’re also going to keep coming in from the outside as well. The interesting thing is is that you’ll see a neighbor that will have something going on, and they fumigated and somebody will see them in their own home. And they’ll say, Oh, they moved to my house. Well, no, not really. The each colony is a separate, completely separate colony, which is different from the ground termites.

So anyways, we’ll talk more about this in subsequent episodes. But I said we’re gonna try to keep it around five minutes. I don’t want to waste your time and so five minutes is just about up. So if you have any questions about this or any other pest questions, give us a call 727 462 0400 and let us know what your questions are or go to our website cobyspestcontrol.com and leave us a message there. Either way, we’d love to hear from you and answer your questions. Thanks and you have a great day.

Bed Bugs Are Really Here in Tampa and Clearwater?

Tampa and Clearwater Have German Roaches!